Informing the Campfire Community every day

In search of crop circles

The jury is still out on how these wonders of nature come about, a mystique that only adds to our sense of wonder. I chanced upon a spectacular crop circle at Cley Hill near Warminster - the first I have seen at close range and was struck by its perfect symmetry and majesty.  It prompted me to look into the phenomenon.

This was a chance meeting. After ascending the steep path to the top of Cley Hill, which overlooks Warminster, Longleatand Frome, my eyes were opened for the first time to the wonders of the spectacular crop circle - this one in the adjoining field to the east of the hill.

Cley Hill is a prominent hill to the west of Warminster in Wiltshire (seemingly the capital of crop-circles in England). The land is in Corseley parish and is owned by the National Trust. Wikipedia reports that there is a legend that the hill was formed by the devil, when he dropped a sack of earth with which he had planned to bury the town of Devizes. He had retrieved the earth from Somerset and was travelling to Devizes when he stopped to ask an old man the distance to the town. The man replied that he had been walking for years to reach Devizes, so the devil abandoned his plan

Rather than speculate or add to the huge amount of words already written, have a look at crop circle connector's FAQs page - interesting reading http://www.cropcircleconnector.com/anasazi/faq98.html

The whole site is a very useful resource. 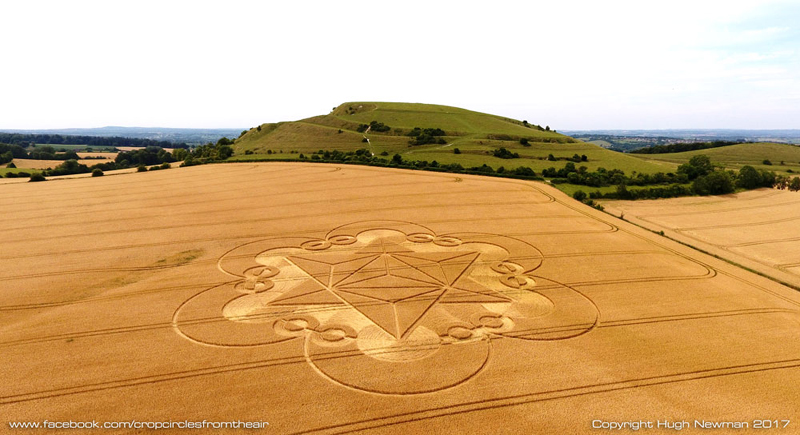 10/09/20
Pete Lawrence
Travel Blog: My epic journey through Europe to the Cyclades

15/08/20
Pete Lawrence
I found my freedom, at Blueberry Farm

To save the world environmentalism has to die Roger Hallam

Downscaling the Doughnut to the city and turning it into a tool for transformative action. Kate Raworth

Qanon, Burning Man, the failure of neo-liberalism and the Occult Daniel Pinchbeck

Portland : What's happening there shows that free speech alone is not enough to guarantee our freedom Billy Bragg

Travel Blog: My epic journey through Europe to the Cyclades Pete Lawrence

Now that we can find flour... the sourdough journey starts here Julie Horsley

Would you like to join Campfire’s team? Pete Lawrence

I found my freedom, at Blueberry Farm Pete Lawrence